Global stocks down as U.S. banks drag; oil up as Syria angst lingers

NEW YORK – A gauge of stocks across the world fell on Friday but was on track to end the week with its strongest performance in five, while crude oil added to recent gains that drove it to highs not seen since late 2014.

The German share price index, DAX board, is seen at the stock exchange in Frankfurt, Germany, March 21, 2018. REUTERS/Tilman Blasshofer

Scott Brown, chief economist at Raymond James in St. Petersburg, Florida, said stock prices have taken in much of the heightened expectations on earnings.

“This has not been the typical pre-earnings season where you’re talking down expectations. There is some potential for disappointment; at the same time there is also lot of hope.”

Tax cuts are expected to help corporate America post its biggest quarterly profit growth in seven years. Earnings at S&P 500 companies are estimated to grow by 18.4 percent from a year earlier.

The larger bank stocks .SPXBK fell 2.6 percent Friday, still up about 1 percent for the week.

Global investors seemed to focus on the lack of a clear sign that any U.S.-led attack on Syria was imminent, but the prospect of Western military action in Syria that could lead to confrontation with Russia hung over the Middle East.

Oil prices rose and were headed for their largest weekly gain since July on support from lingering concerns about geopolitical risk and reports of dwindling global oil stocks.

“The geopolitical jitters just keep getting priced in here more and more, as we get closer to the moment of the strikes, if there are any,” said John Kilduff, partner at hedge fund Again Capital Management. He noted that Syria poses a large risk to global stability because of its relationship with powerful oil producers.

“Syria is a client state of both Russia and Iran and the risk for escalation is quite high and I think that is what the market is worried about.”

Trade tensions also were not far from the surface, with analysts at Citi noting prolonged uncertainty will likely hurt open Asian economies such as Taiwan, Singapore and South Korea.

The Hong Kong Monetary Authority stepped into the currency market and bought another HK$3.038 billion ($387.01 million) in Hong Kong dollars on Friday as the local currency hit the weaker end of its trading range.

The U.S. dollar hit a seven-week high against the Japanese yen. The yen tends to benefit from geopolitical uncertainty and risk aversion. JPY= [FRX/]

Aluminum hit a six-year high on Friday and posted its biggest weekly gain since the current contract was launched after the United States imposed sanctions on Russia’s UC Rusal (0486.HK), the world’s second-biggest producer. [MET/L] 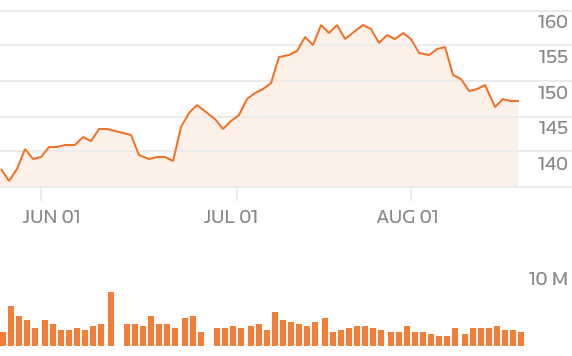 In sovereign debt markets, the U.S. Treasury yield curve hovered at its lowest level in more than decade as short-dated yields have risen more than longer-dated ones this week on expectations of further interest rate increases from the Federal Reserve.